Visual artist Karen Klassen has always created art. From drawing as an adolescent to floral designer/business owner and many classes and experiments in between.

Karen`s contemporary mosaics are a celebration of the natural world and an exploration of imagination. Creating and experimenting with materials, texture, and colour, she sees unexpected potential in a variety of materials.

For more information regarding my work or to inquire about a private viewing, a certain piece or sale, please contact me at:

The Goddess by Karen Klassen

is featured at The Avens Gallery in Canmore, Alberta. 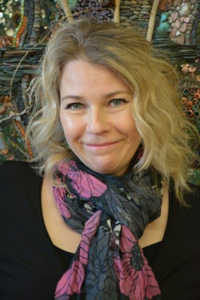 Born in Edmonton,  Karen grew up on an acreage just north of Edmonton,  in Namao.  Playing outside, climbing trees, and playing with the dogs , horses and her pet goat, gave her appreciation for the simple things in life. Growing up with such a creative mother and entrepreneur parents provided Karen with the foundation to dream, succeed and live life to the fullest.

Moving to Edmonton after graduating, she began working full time in the family owned flower shop.  At the age of 20, Karen became the owner of the flower shop and her artistic and business career flourished.

After a 13 year success, Karen sold the business to start a family and began to explore many art mediums. In 2005 she discovered mosaics and began developing her skills.

2007 was Karen`s first solo show at the Art Beat Gallery, in St.Albert.  Susan Jones of the St. Albert Gazette writes, “ Colour flows though her art the way a river might flow over rocks and stones. Some of her mosaics appear as if lifted from a desert, while others are more reminiscent of the sand mandalas made by Buddhist monks”.

Her goal is to create works of art that are inspirational, timeless and can transport us temporarily to higher levels of consciousness.

Karen`s mosaics can be seen at current events, galleries, and festivals throughout Edmonton. Her mosaic artwork “cells” was selected for permanent display at the Edmonton Cross Cancer Institute.

She believes that art sets down a distilled expression of the human spirit, one that`s tangible in form and accessible to all. Karen continues to hone her skills in mosaic and sculpture as well as assists and fabricates with local mosaic artists for public and private projects.

These are great for gift giving and the sizes are perfect for a desk, table, anywhere you need a little piece of nature!  These ship easily across Canada and to the USA.
I offer two sizes 6×6” and 6×4” as well as irregular “off” cut sizes.

I created the Pocket Art series as a smaller offering that still provides the full tactile experience of my larger pieces yet they fit on a table or a shelf within your favourite space.  These pieces have reflective and dimensional surfaces of mosaic that resonates deeply for me.

The dialogue between contemplation and expression is a rewarding and fascinating experience.  My creative inspiration comes from mother nature. Trees, mountains, oceans, topography and geological formations, flora and fauna. I nurture the process and development of ideas to the emotional response I get from the natural tessera.

I strive for conceptual meaning in my work. My process is to work spontaneously and expressively using various textures and shape of tessera to create visual abstract representation of landform. I start with an interesting piece that attracts me which serves as a key element that will further the development of the piece. As the vital lines develop the composition, details are added through an endless succession of artistic decisions.